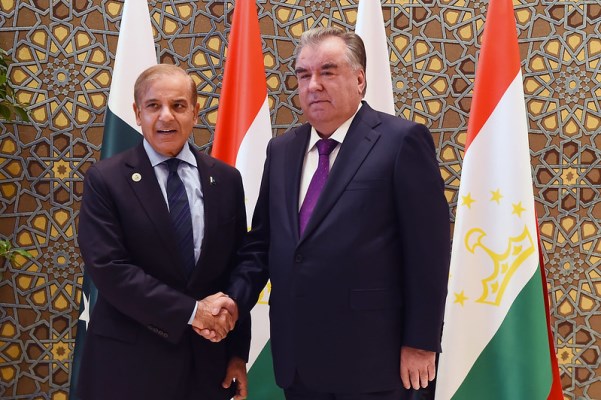 The Founder of Peace and National Unity — Leader of the Nation, President of Tajikistan Emomali Rahmon met with the Prime Minister of the Islamic Republic of Pakistan Shahbaz Sharif on the sidelines of the meeting of the Council of Heads of States of the Shanghai Cooperation Organization in Samarkand, Uzbekistan.

At the beginning of the meeting President Rahmon congratulated Shahbaz Sharif on his election as Prime Minister of Pakistan and wished him success in his responsible state activities.

He also expressed his sincere condolences and sympathy to the Prime Minister and the people of Pakistan regarding the recent devastating floods that had recently hit Pakistan. In his turn Prime Minister Sharif expressed his deep gratitude to Tajikistan for providing humanitarian aid.

President Rahmon emphasized that strengthening and expanding friendly relations and constructive cooperation with Pakistan is one of the important directions of Tajikistan’s foreign policy.

The successful development of cooperation since the establishment of diplomatic relations 30 years ago in the political, economic, trade, cultural, humanitarian, and security spheres was noted.

A successful implementation of СASA-1000 project and access to Pakistani ports were noted as important and in the interest of both countries.

Taking into account the rich experience of Pakistan, the Tajik side proposed to establish joint enterprises for the processing of cotton fiber, wool, leather, the processing of marble stones, and the glass used in construction.

Stepping up of the work of the Joint Intergovernmental Commission on Trade and Economic Cooperation, the Joint Council of Entrepreneurs, the Tajik-Pakistani Business Forum were noted as vital.

The partnership of the two countries in the field of security, in fighting against terrorism, extremism, drug trafficking and transnational crime we likewise noted as important.

The two leaders touched upon different aspects of regional and international agenda, in particular the current situation in Afghanistan.