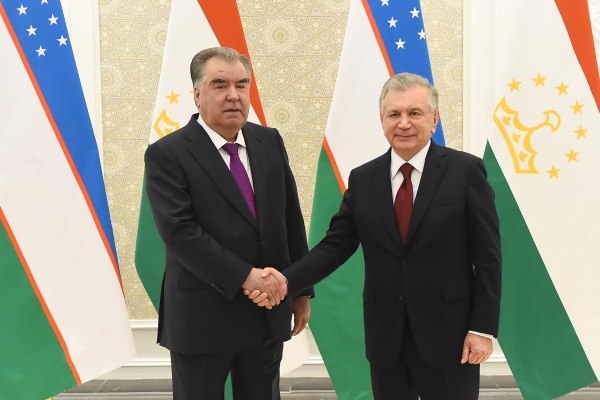 The Founder of Peace and National Unity — Leader of the Nation, President of Tajikistan Emomali Rahmon met with the President of the Republic of Uzbekistan Shavkat Mirziyoyev on the sidelines of the meeting of the Council of Heads of States of the Shanghai Cooperation Organization in Samarkand.

Pressing issues of Tajikistan – Uzbekistan cooperation were the main items of the meeting agenda.

At the outset, President Rahmon congratulated his counterpart Shavkat Mirziyoyev on the successful presidency of Uzbekistan in the SCO. A high level of bilateral relations within the strategic partnership and alliance was noted. Further development of cooperation between the two countries was considered to be in line with the fundamental interests and aspirations of the two brotherly peoples.

The parties noted their appreciation of the results of the summit talks reached following President of Tajikistan’s visit to Uzbekistan. President Rahmon expressed his confidence that the reached regular implementation agreements will give a qualitatively new boost to the cooperation of the parties in all areas.

At the same time, a high level of mutual trade turnover was noted.

Promising joint projects was called in the field of energy and transportation. The counterparts also expressed satisfaction over the launch of the implementation of two joint hydroelectric power plants in the Zarafshon River, with the re-establishment of direct railway connections between the capitals of the two countries.

The importance of further expansion of cooperation in the cultural and humanitarian field of the two countries was noted. The parties called the meaningful development of the bilateral agenda with new issues in the interest of both countries.