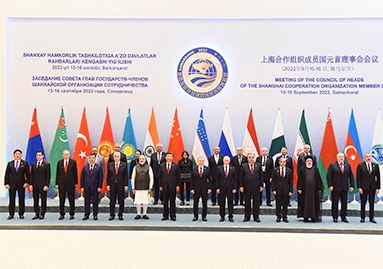 On September 16, 2022, the Founder of Peace and National Unity – Leader of the Nation, President of the Republic of Tajikistan, Emomali Rahmon, in the city of Samarkand of the Republic of Uzbekistan, took part in a regular meeting of the Council of Heads of State of the Member States of the Shanghai Cooperation Organization.

During the meeting in a narrow format, the heads of the SCO member states, in the context of the development of the political and economic situation in the region, exchanged views on topical regional and international issues.

In his speech, the Leader of the Nation, President of Tajikistan, Emomali Rahmon, noted that over the past two decades, within the framework of the SCO, it was possible to build a model of mutually beneficial partnership, the effectiveness of which is ensured by the equality of all member states and decision-making based on consensus. It was emphasized that today the Organization faces a responsible task to ensure the sustainable development of the region through joint efforts. The issues of climate change and transport connectivity were highlighted. At the same time, it was noted that building a sustainable economic system of states is impossible without the promotion of “green energy” and the creation of an effective transport infrastructure in the SCO space.

The Leader of the Nation pointed out that the issues of ensuring regional security should remain the main component of the SCO’s activities. Taking into account the difficult situation in Afghanistan, it the need for a progressive increase in efforts to counter terrorism, extremism, separatism, drug trafficking and other manifestations of cross-border organized crime was highlighted.

As part of the meeting in an expanded format, the heads of delegations discussed issues of further deepening multifaceted and mutually beneficial cooperation within the SCO using the potential of observer states and SCO partner states in dialogue.

In his speech, the Leader of the Nation recalled that at last year’s anniversary SCO summit in Tajikistan, the strategic guidelines for the development of the Organization in the near future were determined. “The Dushanbe Declaration states that the Central Asian region should continue to be the core of the SCO. In today’s conditions, this principle is of particular importance,” – emphasized Emomali Rahmon.

Speaking about security issues, the President of Tajikistan noted a dangerous trend in the spread of the ideology of religious radicalism and called on the SCO countries to jointly monitor the situation and act proactively, preventing possible risks of increasing security threats. The Leader of the Nation also expressed concern about the growth in the volume of drug smuggling from Afghanistan, noting the relevance of the idea of creating a separate structure of the Organization responsible for the anti-drug direction.

During his speech, Emomali Rahmon recalled his proposal last year to adopt the Strategy for the Economic Development of the SCO Region until 2030 and suggested instructing the heads of government to consider this document at the next meeting with a view to its approval at the next SCO summit.

Following the meeting, the heads of state signed 22 decisions on various issues on the SCO agenda, in particular, they adopted the Samarkand Declaration of the Council of Heads of State, and also approved the Comprehensive Action Plan for 2023-2027 to implement the provisions of the Treaty on Long-term Good Neighborliness, Friendship and Cooperation of the SCO Member States and the Concept of Cooperation of the SCO Member States on the Development of Interconnectivity and the Creation of Efficient Transport Corridors.

By the decisions of the heads of the SCO member states, the procedure for admitting Belarus to the SCO membership was launched and the status of the SCO dialogue partner was granted to Bahrain, the Maldives, Myanmar, the United Arab Emirates and Kuwait.

The Leader of the Nation expressed sincere sympathy and condolences to the Prime Minister and all the people of the Islamic Republic of Pakistan in connection with the tragic devastating floods in that country.

At the end of his speech, the Head of our state congratulated the Prime Minister of the Republic of India, Narendra Modi, on his assumption of the function of chairman of the SCO for the coming period.