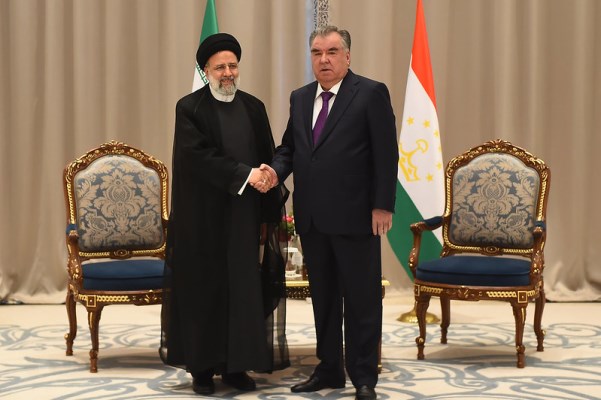 The Founder of Peace and National Unity — Leader of the Nation, President of Tajikistan Emomali Rahmon met with the President of the Islamic Republic of Iran Ebrahim Raisi on the sidelines of the meeting of the Council of Heads of States of the Shanghai Cooperation Organization in Samarkand, Uzbekistan.

During the discussion of the expanding multifaceted cooperation between Tajikistan and Iran, the two sides expressed their satisfaction over the positive processes of constructive political dialogue and trade growth between the two countries, which reached more than $ 116 million in the past six months. It is worth noting that this indicator was equal to $ 120 million in 2021.

They counterparts shared their intention to expand bilateral cooperation, above all in trade, economy, industry, agriculture, energy, transport, and communication,  as well as for attracting capital, establishing joint industrial enterprises, close inherent relations between free economic zones, and industrial towns.

At the same time, President Rahmon supported the establishment of a joint working group for the purpose of using the transit capacities of the two countries

The need for more active bilateral tools, such as the Joint Commission for Trade and Economic, Technical and Cultural Cooperation, Joint Tajik – Iranian Investment Committee, regularly holding exhibitions of goods and products, and meetings of business circles were noted as vital.

Relaying the shared historical and cultural values of our people, President Rahmon noted the importance of holding cultural days of both parties in each other’s territory in the near future to strengthen the cultural relations of the two countries. The two leaders also exchanged views on the situation in Afghanistan.