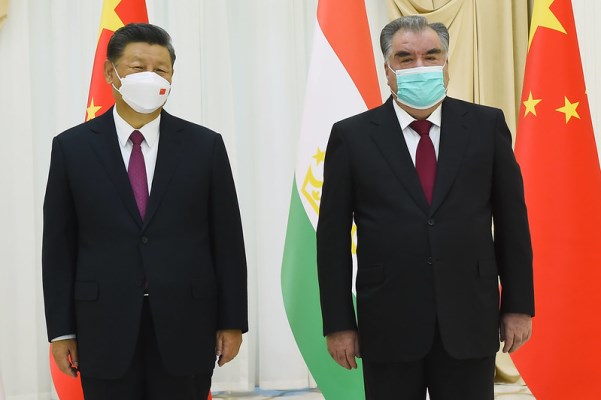 On the sidelines of the meeting of the Council of Heads of States of the Shanghai Cooperation Organization in Samarkand, Uzbekistan, the Founder of Peace and National Unity — Leader of the Nation, President of Tajikistan Emomali Rahmon met with the President of the People’s Republic of China Xi Jinping.

A wide range of issues related to bilateral and multilateral cooperation between Tajikistan and China were the focus of the meeting agenda.

Great results reached during the productive political dialogue in the last 30 years since the establishment of diplomatic relations between the two countries which contributed to strengthening friendly relations, good neighborliness, and comprehensive strategic partnership were noted.

President Rahmon noted his appreciation of the continuous development of cooperation between the two countries in economic, trade, cultural, humanitarian, and security spheres.

The mutual turnover of goods between the countries has increased by 82% compared to the same period last year. In this context, consideration was given to the question of existence of a large potential of opportunities in the agricultural sector.

They reaffirmed their interest to further expand cooperation in transportation, communication, industry, energy, new technologies, digital economy, and green development. Special attention was paid to the implementation of specific investment projects in these areas.

The two leaders continued their discussion on matters related to the involvement of the Chinese side in the implementation of the Rogun Dam, renewal of TALKO’s production capacities, implementation of the second stage of the Dushanbe-Kulma highway rehabilitation reconstruction project, and the development of the Khorog — Kulma highway rehabilitation reconstruction project.

In this regard, President Rahmon noted that the Tajik — China cooperation has great potential in the fields of metallurgy, light industry, food, as well as joint industrial parks.

The sides also exchanged views on pressing issues on the regional and international agenda, including the latest developments in Afghanistan.

President Xi Jinping stated that the Chinese side understands Tajikistan’s concerns regarding the situation in Afghanistan and is ready to continue close cooperation in the field of security and strengthening border protection with Afghanistan.

The Chinese side also emphasized its interest in the expansion of practical regional cooperation within mechanism of China+Central Asia (C+C5).