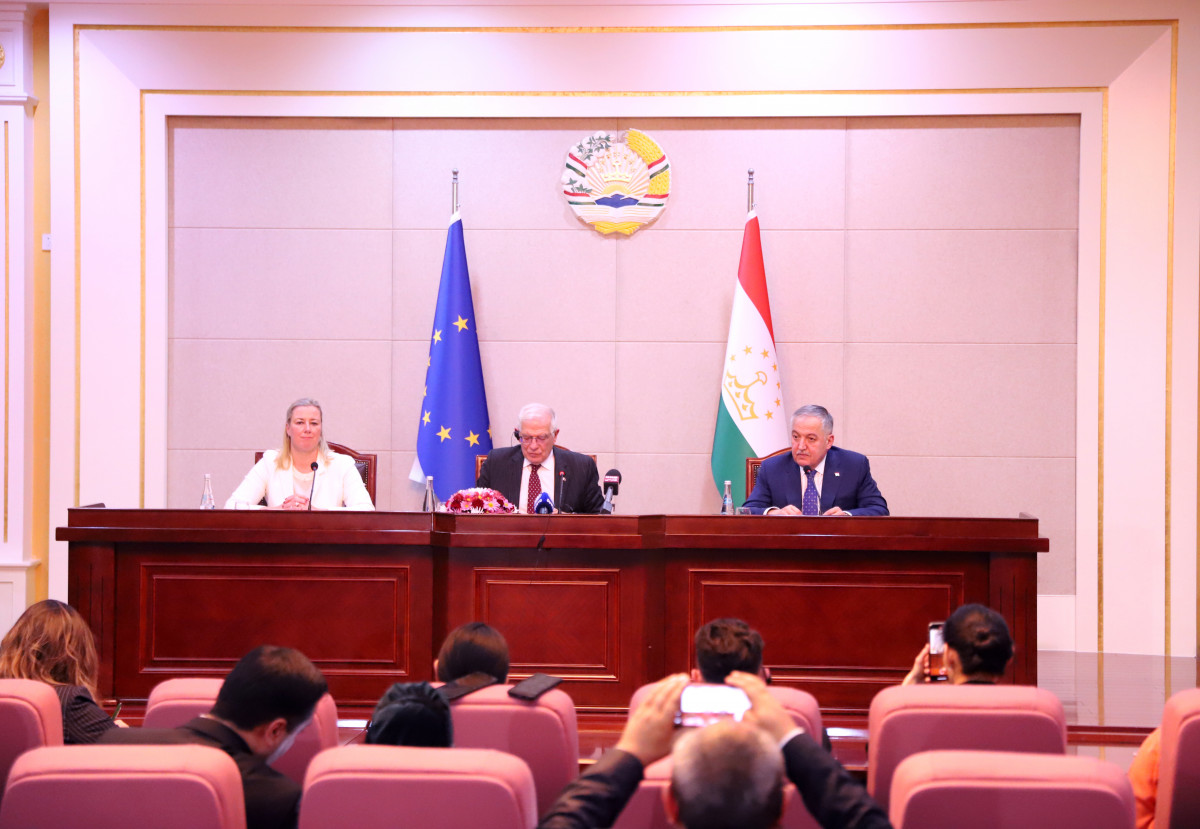 A few minutes ago, we held successful meetings and negotiations with the High Representative of the European Union for Foreign Affairs and Security Policy Mr. Borrell, who arrived in Tajikistan for the first time on an official visit.

The European Union is one of Tajikistan’s important partners in the international arena and the visit of the High Representative of the European Union for Foreign Affairs and Security Policy, Mr. Borrell, to Tajikistan is another clear sign of the parties’ interest in continuing fruitful and multifaceted cooperation.

Today, we held a fruitful dialogue on all issues of mutual interest, especially on the current state of our relations, ways of their further expansion, regional and international topics.

It was emphasized that the material and technical assistance provided by the European Union to Tajikistan during the coronavirus pandemic was very valuable and important for us.

The sides stressed that on the basis of the Agreement on Cooperation and Partnership between Tajikistan and the European Union, the relations between the parties are steadily strengthening and expanding.

It was noted that new political, economic trends, as well as security processes have emerged in Central Asia and beyond, and this reality requires expanding cooperation and updating Tajikistan-EU legal framework.

In this regard, we discussed the issue of signing Enhanced Partnership Cooperation Agreement between Tajikistan and the European Union, and agreed to start the negotiation process on the Agreement next year.

We expressed our deep concern about the threats of expansion of terrorism and manifestations of extremism, cross-border organized crime, including drug trafficking and arms smuggling.

We stressed that both sides will strengthen their cooperation in the fight against the above threats.

During the talks, much attention was paid to the issues of security and stability of the borders of Tajikistan and the situation in Afghanistan.

We want the establishment of peace and stability in Afghanistan, which is an important factor in ensuring security in the region, as soon as possible.

We agreed that the creation of a comprehensive and inclusive government that meets the interests of all social and ethnic groups living in Afghanistan is a key factor in establishing lasting peace and stability in this country.

One of the most important tasks is considered to be a speedy settlement of the conflict and reduction of tensions in the Panjsher province by declaring a ceasefire and opening roads to provide humanitarian assistance to the population.

In this regard, the High-Level Political and Security Dialogue between Central Asia and the European Union was named as an important mechanism.

We stressed the importance of Tajikistan-EU cooperation on strengthening the borderline, in particular through the expansion of the BOMCA/CADAP programs.

We positively assessed our cooperation within the framework of the European Union’s New Strategy for Central Asia.

The important role of humanitarian cooperation in the development of relations between Tajikistan and the European Union was noted, and the parties once again stressed the need for their greater strengthening and expansion.

The parties showed great interest to the EU-Tajikistan Human Rights Dialogue and expressed their readiness to continue it.

The impacts of climate change and environmental issues were also at the center of our negotiations.

It was noted that we have common position on these issues, and we expressed our readiness to take measures to prevent the consequences of climate change.

Tajikistan once again emphasized that it is in favor of the rational and economical use of the region’s water resources, as well as the protection of its environment.

We noted the importance of Tajikistan’s global water initiatives, in particular, the International Decade for Action “Water for Sustainable Development 2018-2028”, related activities and Tajikistan’s initiative to declare 2025 as the Year of Glacier Preservations within the framework of the SDGs.