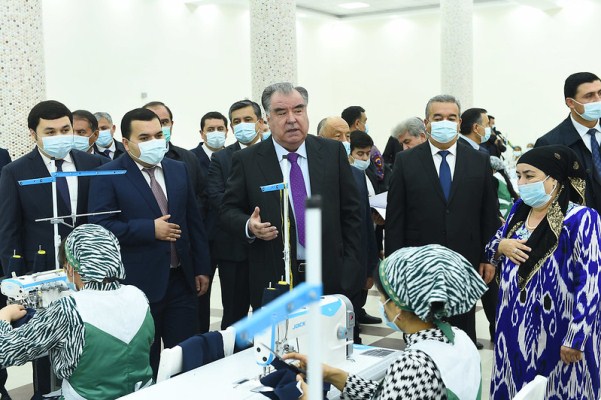 DUSHANBE, 25.03.2021 (NIAT Khovar) – Following his trip to Bokhtar and Kushoniyon, the Founder of Peace and National Unity, Leader of the Nation, President of Tajikistan  Emomali Rahmon arrived in Jaloliddini Balkhi, where he opened the Navruz business complex built to coincide with the 30th anniversary of independence.

Another opening ceremony took place for the new Ismoil Diagnostics and Medical Clinic built by the Gholibjon Kholov Company in the Navobod community. The clinic also produces its own medical gauze, with a production capacity of over 1 million packages per year.

The opening ceremonies of the indoor sports grounds built by local entrepreneur Begmurod Kholov, as well as a service center and a hotel were also attended by President Rahmon.

In addition, he also visited the Safar Jumaev Commercial Farm and inspected its newly established greenhouse. The nearly 2000- hectare farm has been operating since 1961 and is the largest farm in the Jaloliddini Balkhi district. The farm its is focused on cattle breeding, seed production, gardening and crop production.

The Exhibition of Agricultural Products and Machinery of Jaloliddini Balkhi district was also attended by President Rahmon.

According to statistics, in the past of two months the volume of agricultural production in this district amounted over 19 million somoni, which is one million more compared to last year.

Also, in the Jaloliddini Balkhi district, President Rahmon took part on the opening ceremony of the Mohir cement manufacturing plant, which has a production capacity of 600,000 tonnes of high quality cement per year. The plant is equipped with dust collectors to guarantee complete absence of harm to the environment. Most of the cement produced is exported to Afghanistan and Uzbekistan. The Mohir cement manufacturing plant is built to achieve the fourth strategic goal — rapid industrialization.

The facility was built following announcement of the 2019-2021 as the Period of Rural Development, Tourism and Folk Crafts, and in anticipation of the 30th anniversary of state independence.

Thereafter, President Rahmon met with orphans and provided them with material and cash assistance packages on the occasion of Navruz.

Meeting of the Ambassador with H. E Austen Zecha-Co-Founder/President and CEO of ISC