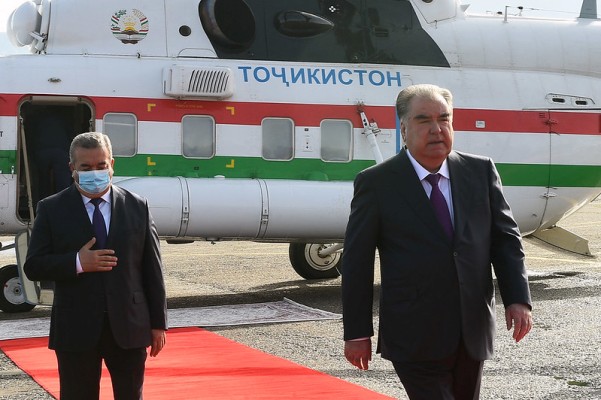 DUSHANBE, 24.03.2021 (NIAT Khovar) –The Founder of Peace and National Unity, Leader of the Nation, President of Tajikistan Emomali Rahmon is visiting Khatlon Province to check the socio-economic development of the region, and to take part in the opening of the facility commemorating the 30th anniversary of independence.

His visit began in Bokhtar where he opened the Bokhtar Medical and Innovative College which will accommodate 1,700 students. President Rahmon stressed that public health is one of priorities of the government.

He also visited the Bokhtar Industrial Zone and took part in the opening ceremony of the enterprise for the production of slate, built by domestic entrepreneur Dustmurod Majidov within the framework of the fourth national goal — rapid industrialization.

The enterprise has installed two state-of-the-art production lines purchased from Russia and China with planned production capacity of 1,500 to 2,000 pieces of slate per day and 1,100,000 annually.

While there he also laid the foundation stone for the construction of a new enterprise specializing in the production of asbestos-cement pipes.

According to the plan, it will produce from 500 to 800 pieces of asbestos-cement pipes per day.

President Rahmon also visited the exhibition of industrial products of Khatlon region, which featured a variety of industrial and construction materials.

In the Bokhtar Industrial Zone, President Rahmon also opened the Somoni Rasul which will manufacture socks and bicycles.

The state of the art weaving machine that was purchased in the Czech Republic and South Korea will produce up to 100,000 pairs of socks monthly.

So far, the company has established production of more than 10 types of bicycles, with the capacity of producing 1,000 bicycles per month.

Thereafter, President Rahmon met with 200 orphans of Khatlon and handed them material and cash assistance packages.

There are 29 organizations and institutions in the region which provide social services to those with disabilities.

Currently, there are 63 boarding schools in the country. During the 2020-2021 academic year 8,146 students attended such schools, including 1,653 children with disabilities, and nearly 1,700 orphans.

Virtual meeting of H.E Mr. Ardasher Qodiri, Ambassador of the Republic of Tajikistan to Malaysia with H.E. Mr. Wan Hadfi Lutfan Bin Hj Abdul Latif, Director of the Department of Asia-Africa of the Ministry of Foreign Affairs of Brunei Darussalam