Meeting with the Prime Minister of Kazakhstan Askar Mamin 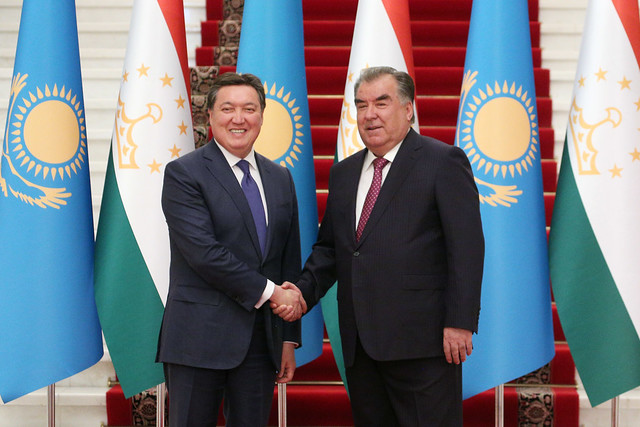 DUSHANBE, 11.07.2019. (NIAT Khovar) – The Founder of Peace and National Unity, Leader of the Nation, President of Tajikistan Emomali Rahmon received the Prime Minister of Kazakhstan Askar Mamin. The meeting took place today at the Palace of the Nation.

The head of state Emomali Rahmon noted the fruitful meeting he had with the President of Kazakhstan Kassym-Jomart Tokayev at the fifth summit of the Conference on Interaction and Confidence Building Measures in Asia (CICA), which took place in Dushanbe earlier this year in June, and stressed that all meetings between the officials of both countries promote the development of cooperation and friendship between the two states.  Askar Mamin, in turn, expressed his gratitude to President Emomali Rahmon for the warm and sincere welcome accorded to him and his delegation and highly valued the results of his official visit achieved in Tajikistan.

It was emphasized that further development of trade and economic cooperation with Kazakhstan is one of Tajikistan’s foreign policy priorities.

Both sides noted with satisfaction the growth in bilateral trade turnover; Using the available opportunities and resources within the framework of the activities of the Tajik- Kazakh Intergovernmental Commission on Economic Cooperation to further improve the indicators of trade turnover was likewise noted as an important area.

The meeting also addressed the issue of attracting direct investments to the economy of both states, strengthening the Work Council, development and expansion of cooperation in the water, fuel and energy sectors, preferential use of railways and roads, access to sea routes and transportation of products, and creating joint ventures for the production of flour and bakery products.

The head of state Emomali Rahmon noted that Tajikistan is ready to offer Kazakh investors a number of promising projects, including in the agro-industrial, energy, light industry, mineral processing, and transportation and communication sectors.

Both sides confirmed their mutual commitment to further development of interstate cooperation in all priority areas.

In addition, some current issues on the bilateral agenda as well as regional and international cooperation were touched upon.

Ambassador of Tajikistan presented his credentials to the King of Malaysia