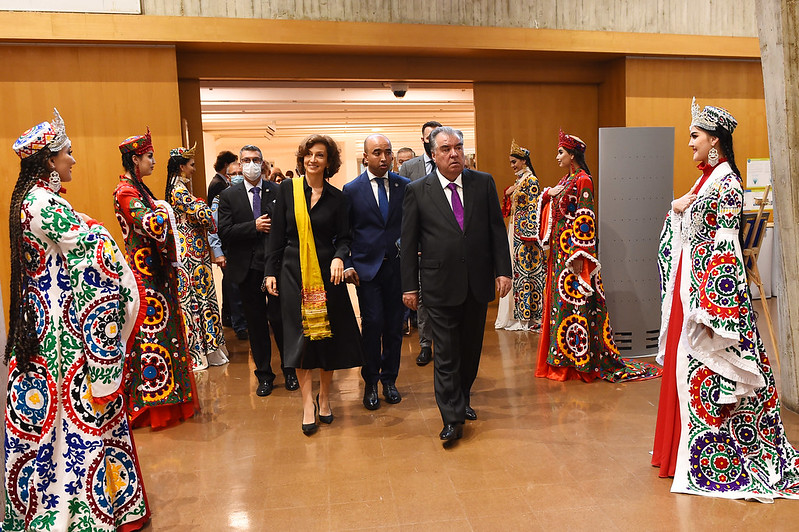 The Founder of Peace and National Unity, Leader of the Nation, President of Tajikistan Emomali Rahmon took part in the opening of the Tajikistan Day of Culture in UNESCO.

The event is timed to coincide with the 75th anniversary of establishment of UNESCO.

President Rahmon expressed his gratitude to Audrey Azoulay and all UNESCO officials for their assistance in organizing the event at the Organization’s headquarters.

He noted that Tajikistan attaches great importance to cooperating with the UN and UNESCO.

“We fully support the implementation of projects that make a significant contribution to the development of education and science, safeguarding the country’s tangible and intangible cultural heritage for future generations,” noted Rahmon.

“The National Park of Tajikistan, the ancient city of Sarazm, the national music Shashmaqom, the Navruz holiday, the national dish Oshi palov, the Chakan art of embroidery are outstanding examples of the rich cultural and historical heritage of the Tajik people which are recognized by UNESCO and which have been included in the World Heritage List,” he added.

Opening of the Exhibition titled “Tajikistan – the Land of Golden Rivers” which was held in the Guimet Museum with the participation of the Presidents of Tajikistan and France in Paris is yet another important and memorable event.

After the opening speeches of the President of Tajikistan Emomali Rahmon and the Director-General of UNESCO Madame Audrey Azoulay, a colourful concert program of masters of arts of Tajikistan and talented youth was held in the framework of the Day of Culture of Tajikistan in UNESCO.

Numerous representatives of the countries of the world admired and commended the above concert program.