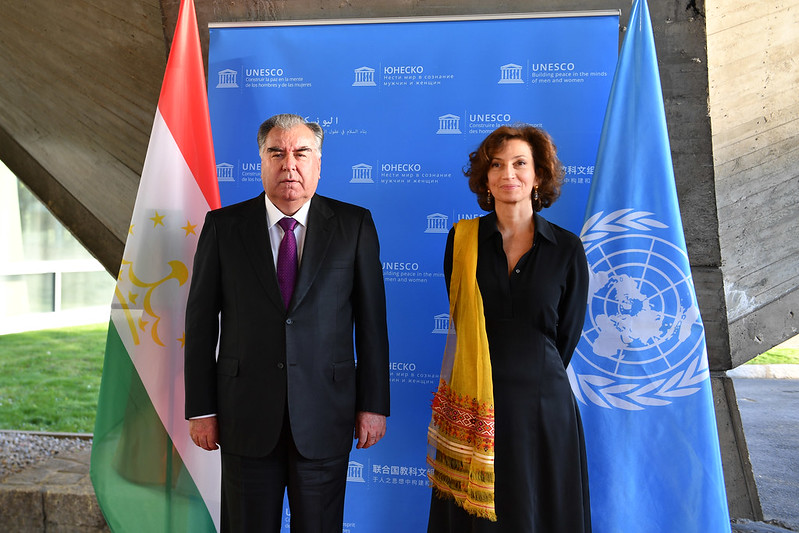 Within the framework of his official visit to France, the Founder of Peace and National Unity, Leader of the Nation, President of Tajikistan Emomali Rahmon met with UNESCO Director-General Audrey Azoulay.

The meeting addressed issues of further cooperation between Tajikistan and the UNESCO in the fields of culture, science and education.

Assessing the UNESCO’s promotion and expansion of cooperation with the Government of Tajikistan, President Rahmon extended his congratulation to the UNESCO staff on the 75th anniversary of this organization.

Expressing his satisfaction with the joint efforts of Tajikistan and UNESCO over the years of cooperation, President Rahmon noted that the ancient city of Sarazm, the national music Shashmaqom, the international holiday Navruz, the national dish Oshi palov, and the Chakan art of embroidery are outstanding examples of the rich cultural and historical heritage of the Tajik people, recognized by the UNESCO and included in the World Heritage List. Currently Hulbuk, the capital of ancient Khatlon, is included in UNESCO’s tentative list.

At present Mehrgon holiday, the art of embroidery, silkworm breeding, silk weaving, the musical instrument Rubob, children’s folk games, and the folk tales of Nasreddin Khoja have been nominated by Tajikistan along with other countries to include in the UNESCO World Heritage List.

Falak, atlas and adras national fabrics are also in the process of being processed for submission to the UNESCO in 2022.

The interlocutors also noted the importance of the implementation of the UNESCO and the European Union joint project “Silk Road Heritage Corridors in Afghanistan, Central Asia and Iran – International Dimension of the European Year of Cultural Heritage.”

The discussion also included UNESCO STEM education and UNESCO ICTs in education, gender equality, education during COVID-19 and beyond, and the Young Professionals Programme for 2021.

Recalling Tajikistan’s global initiatives in addressing water issues, they stressed that the UNESCO International Hydrological Programme (UNESCO/IHP) is one of the important partners of Tajikistan in promoting water and climate issues.

The officials also exchanged views on the current aspect of the bilateral agenda in a follow-up to the Day of Culture of Tajikistan in UNESCO and the opening of the Tajik Art Exhibition entitled “Tajikistan – the Land of Golden Rivers” with the participation of the Presidents of Tajikistan and France.

At the end of the conversation, President Rahmon invited the Director-General of UNESCO Audrey Azoulay to pay a visit to Tajikistan.