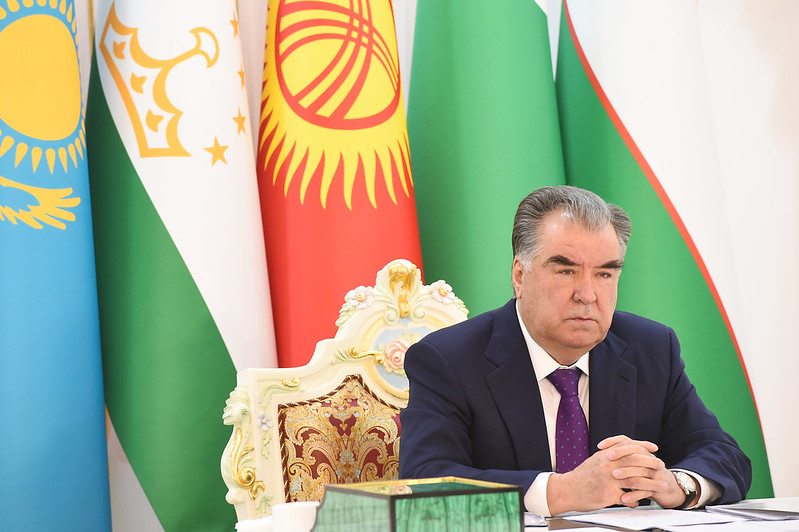 On January 27, the Founder of Peace and National Unity – Leader of the Nation, President of the Republic of Tajikistan Emomali Rahmon took part and spoke at the first Summit of Heads of State in the “Central Asia – India” format, which took place in a virtual mode.

The Summit was chaired by the Prime Minister of the Republic of India Narendra Modi.

The Summit participants exchanged views on the current state of cooperation between the countries of Central Asia and India, as well as the prospects for their further development within the framework of the Central Asia-India summit.

The Summit was dedicated to the 30th anniversary of the establishment of diplomatic relations between the countries of Central Asia and India.

The President of the Republic of Tajikistan called the current level of friendly relations and mutual political trust, the growing process of cooperation between the two countries in the trade and economic sphere, in the fields of culture and security, as the main results of this period.

Along with this, the Head of State stressed that India is now an important partner in the region, and Tajikistan is optimistic about the future of multifaceted relations with this country.

In this regard, the Leader of the Nation expressed the position of our country regarding the promising areas of cooperation between the countries of the region.

First of all, the priority of trade and economic cooperation and the existence of great opportunities in this direction were emphasized.

In this context, the active process of strengthening trade and economic ties in Central Asia in recent years and the growing economic dynamism characteristic of the entire region were noted.

It was proposed to develop a program of specific measures for the effective implementation of the trade potential of the countries of the region within the framework of the Central Asia-India dialogue.

It was pointed out that there are ample opportunities in the direction of investments for the joint implementation of projects in the fields of industry, energy, transport and infrastructure, and agriculture.

In this regard, the interest of Tajikistan in creating joint ventures in the areas of food and light industry, especially in the textile, chemical, medical industries, pharmaceuticals, processing of precious and semi-precious stones was emphasized.

In this context, the Head of State also stressed that cooperation in the energy sector is of great importance for the sustainable development of the economy, and Tajikistan pays special attention to the process of establishing and strengthening cooperation in order to expand the capacity to generate “green energy” from renewable sources.

Along with this, the expansion of transport and communication links was considered an important factor in strengthening trade and economic cooperation between the countries of the region and India. In this process, the interest of the Tajik side in the development of the transport route along the route “Mumbai – Chabahar – Central Asia” was confirmed.

The Leader of the Nation expressed the opinion that the growing importance of ensuring food security requires active cooperation in the agricultural sector. In this regard, the process of intensifying the negative impact of climate change on the economies of countries, in general, including the agricultural sector, was noted.

In this regard, the President of the country identified coordinated practical interaction between the countries of the region and India in the field of environmental protection and biological diversity as one of the priority areas of cooperation.

In this series, further strengthening of cultural and humanitarian ties was outlined as another area of cooperation.

In addition to this, support was expressed by our country for efforts to strengthen cooperation in the fields of education, tourism and healthcare.

Taking into account the capabilities of the parties, continued cooperation in countering the spread of a new coronavirus infection and preventing its consequences, as well as expanding the possibilities for joint production of medical devices, especially medicines, were named among the important areas of relations.

In the field of security, given the difficult international situation, combating terrorism and all forms of extremism, transnational organized crime, and drug trafficking were mentioned among the priority tasks.

In this context, the attention of the participants of the meeting was drawn to the difficult situation in Afghanistan and support for the call of the United Nations for the need to provide humanitarian assistance to the long-suffering people of Afghanistan.

In conclusion, the Leader of the Nation, recalling the experience of constructive multilateral cooperation in the region, especially within the framework of the UN, SCO, CICA, stressed the importance of further development of interaction between the countries of the region in the “Central Asia and India” format.

At the end of the meeting, following the results of the Summit, the Heads of State adopted a Joint Declaration.

Source of the news:
http://president.tj/en/node/27624#mastchoh