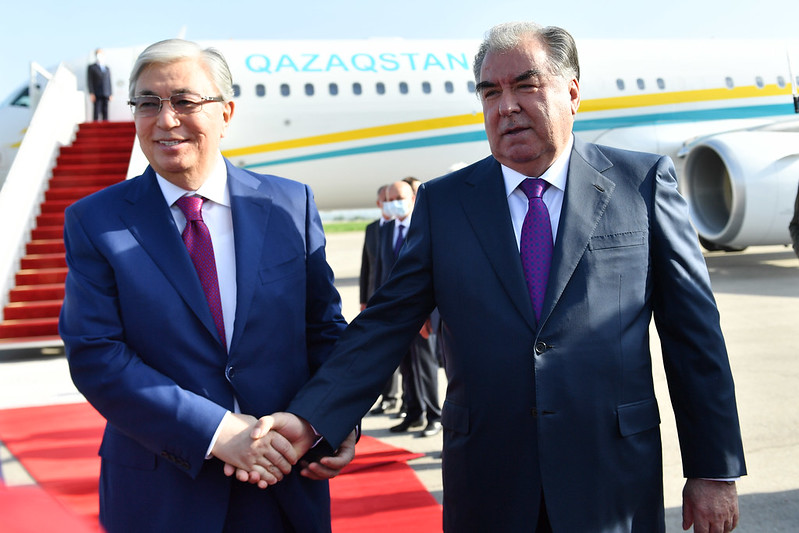 In the Palace of the Nation, the Founder of Peace and National Unity, Leader of the Nation, President of Tajikistan Emomali Rahmon held talks with the President of the Republic of Kazakhstan Kassym-Jomart Tokayev who arrived in Dushanbe on an official visit.

Following the official welcoming ceremony and introduction of members of the two delegations, the counterparts had a one-on-one discussion, which was followed by a meeting with the participation of both delegations.

The meeting covered the current status of Tajik-Kazakh cooperation and prospects for its further development, with an emphasis on political, inter-parliamentary, trade, economic, scientific and technical, cultural and humanitarian spheres, as well as a number of topical regional and international matters. Cooperation in security domain and other important issues were also touched upon.

President Rahmon praised President Tokayev and the First President of Kazakhstan Nursultan Nazarbayev’s roles in strengthening relations and bringing them to the level of strategic partnership.

“Tajikistan appreciates the strategic partnership with the brotherly Kazakhstan. We intend to continue to make the necessary efforts to develop cooperation between our countries in all areas,” said President Rahmon.

They also exchanged views on the issues of jointly mitigating the effects of the COVID-19 pandemic on the economies of the two countries.

Tajikistan also is seeking to collaborate with Kazakhstan in the digitalization of the economy, importing the state-of-the-art technologies, launching joint ventures on processing farm produce, exporting eco products to Kazakhstan and launching joint wholesale distribution centers and utilizing the potential of free economic zones in Tajikistan.

The importance of expanding bilateral collaboration in the field of railway traffic and resuming regular flights between the capitals of the two countries was also emphasized.

The counterparts also looked in detail at the prospects of bilateral cooperation within international organizations such as the UN, SCO, CIS, CSTO and CICA.

Over the current developments in the neighboring Afghanistan, the sides noted the importance of strengthening collaboration between the intelligence agencies in the fight against terrorism, extremism, drug trafficking and transnational organized crime.