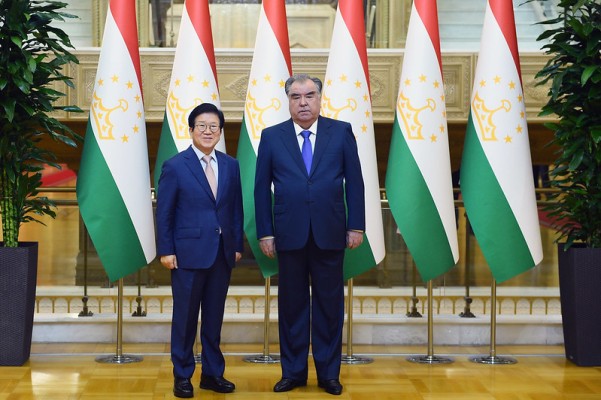 DUSHANBE, 01.04.2021 (NIAT Khovar) – The Founder of Peace and National Unity, Leader of the Nation, President of Tajikistan Emomali Rahmon received the Speaker of the National Assembly of the Republic of Korea Park Byeong-seug who is in Tajikistan on an official visit.

The discussion covered various areas of Tajik-Korean cooperation, including inter-parliamentary relations and prospects for further cooperation with an emphasis on trade, economic, scientific, technical, cultural, and humanitarian cooperation.

The officials emphasized that future activities of the joint Intergovernmental Commission on Trade and Economic Cooperation and expansion of cooperation with the Economic Development Cooperation Fund (EDCF) could be a key factor for strengthening relations and increase in investment benefit for both economies.

The use of rich mineral resources of Tajikistan, creation of logistic and trade centers in Tajikistan’s free economic zones, cooperation in the banking sphere and preferential loan investment in Tajikistan’s economy were outlined as priorities for expansion of bilateral cooperation.

The two sides expressed satisfaction with the level of cooperation achieved between the Tajikis government and the Korea International Cooperation Agency (KOICA).

The two sides also discuss the issues related to prospects of cooperation between Tajikistan and Korea in the fields of tourism, labor migration, and organization of direct flights between the two countries. Strengthening health care cooperation during the pandemic was also touched upon.

Currently, more than 200 Tajik students study in Korean universities and the issue of increasing the student quotas for Tajikistan was raised at the meeting.

Consideration was also given to security collaboration and the current state of affairs in Afghanistan. The fight against international terrorism, extremism, radicalism, drug trafficking and other forms of transnational organize crime were also touched upon.

Park Byeong-seug: We Highly Appreciate the Efforts of the Tajik President to Ensure Peace and Stability in Central Asia