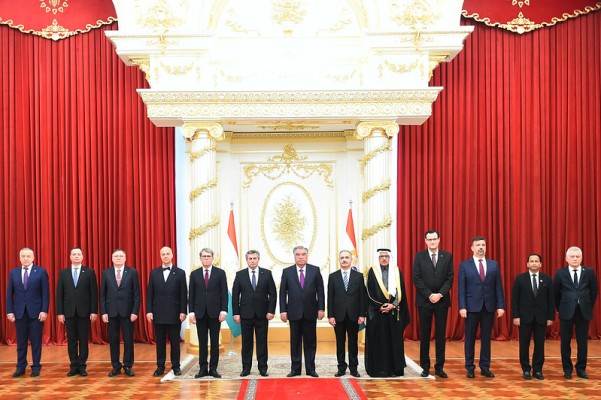 DUSHANBE, 03.11.2021 (NIAT Khovar) – The Founder of Peace and National Unity, Leader of the Nation, President Emomali Rahmon received letters of credence from foreign ambassadors. The ceremony took place in the Palace of the Nation.

The newly appointed ambassadors presented their credentials and conveyed greetings of their heads of state. Among them were Ambassadors Extraordinary and Plenipotentiary of Belarus Viktor Denisenko, Alimirzamin Gavvam oglu Askerov of Azerbaijan, Emre Zeki Karagol of Turkey, Waleed bin Abdulrahman Alreshaidan of Kingdom of Saudi Arabia, Timothy Aidan Marshall Jones of United Kingdom of Great Britain and Northern Ireland, David Grichting of Switzerland, Vaclav Jilek of the Czech Republic, Radoslaw Gruk of Poland, Toomas Tirs of Estonia and Zahangir Alam of the People’s Republic of Bangladesh.

President Rahmon congratulated the newly appointed ambassadors on the commencement of their new post in Tajikistan and expressed confidence that their fruitful diplomatic activities will make a valuable contribution to the revitalization of partnership relations between Tajikistan and the states that they represent.

President Rahmon stressed that since gaining independence, Tajikistan has pursued a balanced, peaceful, tested and comprehensive policy in the international arena and on the basis of the open door policy has been able to find its place in the world arena.

Tajikistan actively establishes friendly relations and multifaceted cooperation with a wide range of countries both in bilateral and multilateral levels, and actively promotes their further development.

He also stressed that the situation in the world community remains complicated due to the growing influence of a number of security, economic, and social factors, and expressed regret that despite the measures taken in various levels, the threats and challenges are not diminishing.

“The deep political, military, economic, and social crisis in Afghanistan, which is a matter of concern to the international community, has become tense,” he noted.

He also noted that Tajikistan is ready to offer its extensive logistics capabilities to provide international assistance to this close neighbor.

While noting the measures taken by Tajikistan in the fight against terrorism, extremism, drug trafficking, and other transnational organized crimes, President Rahmon noted the negative effects of the pandemic on the economy, the detrimental effects of climate change, and the importance of «green» energy, efficient use of hydropower resources, as well as Tajikistan’s global initiatives regarding the protection of glaciers.

Source of the news:
https://eng.khovar.tj/2021/11/president-emomali-rahmon-receives-letters-of-credence-from-foreign-ambassadors-2/

Speech at the High-Level Panel Meeting on Water and Climate