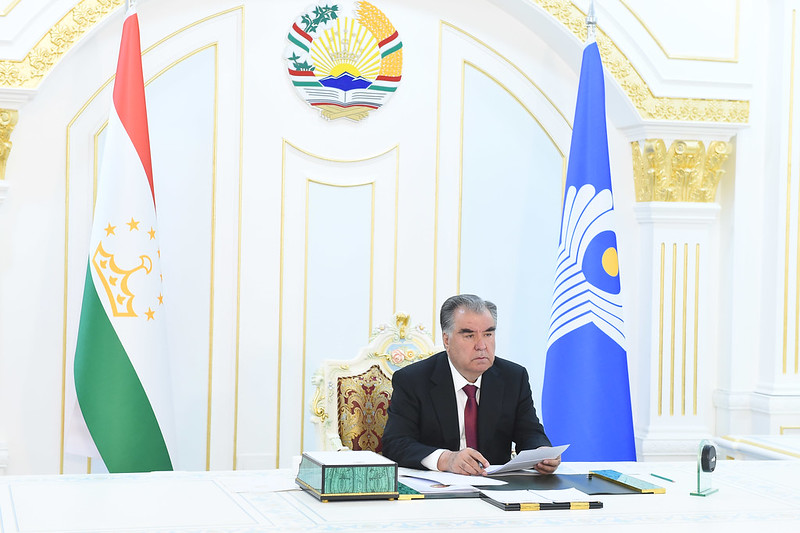 The Founder of Peace and National Unity, Leader of the Nation, President of Tajikistan Emomali Rahmon took part in the meeting of the CIS Heads of State Council via videoconference.

The event was chaired by the President of Belarus, and focused on the current state of and prospects for developing cooperation within the CIS. The officials exchanged opinions on important international and regional matters, in particular within the CIS space.

Offering his congratulation commemorating the 30th anniversary of the CIS President Rahmon wished success to the heads of participating states for constructive co-operation for the benefit of the further prosperity of the member nations.

A proposal was made to pay closer attention to strengthening the coordination of joint efforts to counter the coronavirus pandemic and its negative impact to national economies and other global challenges.

There are great opportunities for cooperation between the CIS nations in the field of digitalization and the introduction of modern technological advances into production.

During the discussion of security issues, special attention was paid to cooperation in the fight against terrorism, extremism, illegal drug and arms trafficking, and other forms of transnational organized crime. In this regard, President Rahmon noted the activities of the Counter-Terrorism Center, which is an appropriate mechanism for collaboration within the CIS.

He expressed confidence that Tajikistan’s prior suggestion to develop a single list of terrorist and extremist organizations banned in the territory of the CIS member nations will be implemented jointly. At the same time, special emphasis was placed on ensuring the protection of CIS’ information space.

The leaders stressed that the political crisis in Afghanistan poses a serious threat to the security of CIS as a whole. The Taliban (included a terrorist group by the United Nations Security Council) rise to power, has further complicated the situation in the neighboring country.

In this regard, there is a need to pay closer attention to collaboration of the intelligence agencies of the CIS in combating the challenges and threats posed by Afghanistan.

When discussing climate change, the Tajik side proposed to declare 2025 the Year of Glacier Protection and to establish a special International Fund for Protection of Glaciers.

President Rahmon expressed hope that these initiatives will be actively supported by the CIS member nations.

Concluding his speech, President Rahmon thanked President Lukashenko for the successful CIS presidency in 2021 and wished President Kassym-Jomart Tokayev of Kazakhstan success in his upcoming chairmanship.

President of Tajikistan Listed Among 500 Most Influential Muslims in 2022