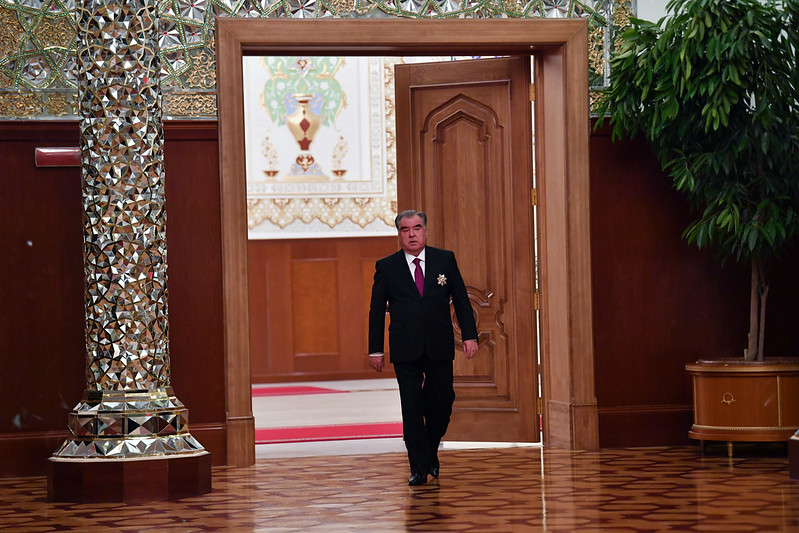 Emomali Rahmon was inaugurated as President of the Republic of Tajikistan in a ceremony that took place at the Great Hall of the Kokhi Somon Palace.

The ceremony opened with the State Flag, Presidential Standard, and Constitution of Tajikistan being brought into the Kokhi Somon Palace.

While President-elect took an oath of office, Chairman of the Central Commission for Elections and Referenda of Tajikistan Bakhtiyor Khudoyorzoda presented the head of state a presidential certificate.

At the same time, the Chairman of the Constitutional Court of the Republic of Tajikistan Abdulhafiz Ashurzoda presented Rahmon with the symbol of presidential power — the Sign of the President of Tajikistan.

Government members, heads and staff of diplomatic missions, war and labor veterans, as well as representatives of communities were invited to attend the ceremony.

Nominated by the Federation of Independent Trade Unions of Tajikistan, Youth Union of Tajikistan, and the People’s Democratic Party of Tajikistan, Emomali Rahmon was re-elected after having received 3,853,987 or 90.92% of the votes.

Officials of security and intelligence agencies, Minister of Defense, Minister of Interior, heads of National Security, and the Committee of Emergency Situations, Civil Defense, as well as the National Guard, and Border Troops Commanders attended the ceremony in the square.

Minister of Defense Sherali Mirzo reported on the readiness of the branches of the Armed Forces to begin the oath taking ceremony and the military parade.

After his greetings, President Rahmon delivered a speech where he noted that an oath of commanders, officers, soldiers and military personnel is an ancient tradition of a national state system and illustration of responsibilities of military personnel in defense of the homeland, state and nation.

The Minister of Defense delivered a text of military oath to the President, as the national anthem was played. The ceremony concluded with the marching of 8,000 officers and soldiers of the Armed Forces and service personnel of other military and law enforcement agencies. A 30-gun salute was fired to mark the occasion.